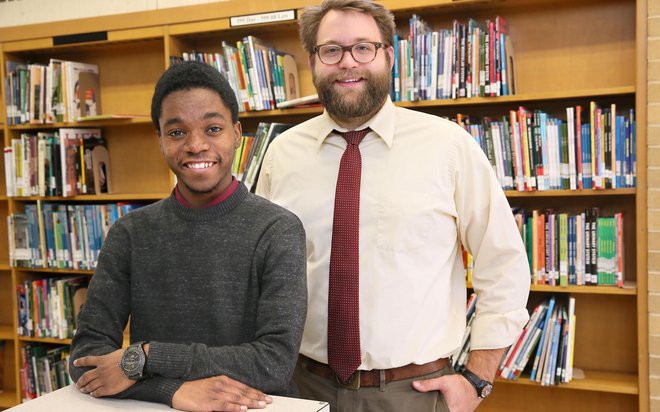 Reprinted from the Milwaukee Journal Sentinel

Alvin Watts' eyes widened as he described the crowds of people and the chaos of ordering a piece of squid from a vendor on the bustling streets of Hiroshima, Japan, which he said were loaded with stores, arcades and memorial sites.

The 16-year-old sophomore at Carmen Northwest High School just returned from participating in the Group of Seven Youth Summit focusing on international peace — one of only two delegates representing the United States at the event. The summit was held in conjunction with Shape Asia Pacific 2016, a meeting organized by the Global Shapers Community of the World Economic Forum.

After spending five days learning about and discussing the atomic bomb and other global issues, Watts was already back at school on Wednesday, jet-lagged and overwhelmed by all he experienced.

"It was a dream come true," Watts said. "It was way more than I expected it to be."

When Watts said his trip was a dream come true, he wasn't exaggerating. Traveling to Japan was a dream passed down to Watts by his late father, Alvin Watts Sr. When the elder Watts died, he left behind his dream of seeing the world, and the younger Watts, who was just 6, held onto it tightly.

"I think he felt like a bird in a cage," Watts said of his father wanting to get out and explore the world and why he now wanted to be the one to see Japan.

"This has been his dream as long as I've known him," said Liz Hein, dean of students and culture at Carmen, who learned about the youth summit from a Facebook post and said she thought of Watts immediately. She said he can now be an example to other students of what it's like to have a dream, to share it and to be driven to make it come true.

"Speak into existence what you want," Hein said.

It was a community of mentors like Hein going above and beyond to support Watts that made the trip possible. Watts' adviser and teacher at Carmen, Andrew Linderman, helped Watts complete his application to the summit after school hours and drove Watts to Minneapolis just days before he left for his trip to work out complications with obtaining his passport.

"It's the perfect opportunity for someone who has had to deal with a lot in his life," Linderman said. "It's one of those once in a lifetime, invaluable experiences."

When he arrived in Japan, Watts said, he was in shock at first. When he fully realized where he was, he said he smiled and said, "Oh snap! I'm really here!"

Watts explained that he felt the trip meant even more to him as a student living in the central city of Milwaukee.

"Not many kids like me get opportunities like this," he said, also saying he wished more students at his school had the chance to go abroad.

Before he left for his trip, Watts said he hoped to meet people in Japan with different perspectives and to better understand where people come from, expanding his worldview.

As one of only two delegates representing the U.S. at the summit, Watts befriended students from all over the world, including his roommate, a 17-year-old Italian boy named Tiziano who had a "cool accent."

Twenty-seven students participated in the summit, half from Japan and half from the other G7 countries: Canada, France, Germany, Great Britain, Italy and the U.S.

Watts said he loved talking with the students about their different backgrounds and what each of their schools were like. He plans to keep in touch with his new friends through social media.

The students began the summit by working together to draft a Hiroshima declaration detailing what they wanted to change in the world, how they planned to make those changes and how they wanted their governments to help. The three most important issues they picked were ridding the world of nuclear weapons, eradicating global poverty and strengthening efforts to combat climate change, Watts said.

"I've always wanted to contribute to changing the world," Watts said. "And I got to do that."

In addition to their discussions, the students visited the Peace Memorial Museum, offered flowers at the Cenotaph for atomic bomb victims and listened to the stories of an atomic bomb survivor. They also got to check out a Japanese high school.

Watts was joined in Japan by Maurice Thomas, vice curator of the Milwaukee Global Shapers Hub and executive director of Milwaukee Excellence Charter School, who worked hard to make sure a student from Milwaukee would be selected to participate in the summit.

Upon his return to Milwaukee — exhausted after a long day of travel — Watts said he turned to the photo of his father he has next to his bed before falling asleep.