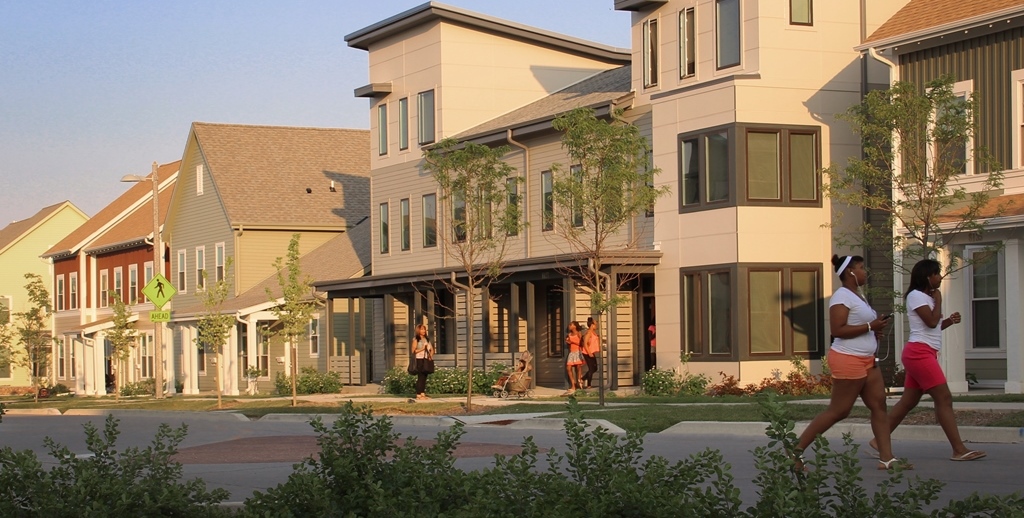 For more than a decade, the Housing Authority of the City of Milwaukee (HACM) has redeveloped older buildings to increase their energy efficiency and developed new buildings and neighborhoods that push at the boundaries of sustainability standards. With each succeeding development project, HACM has built upon its past experience to refine its design practices and broaden their impact.

Along the way, HACM has helped to set new benchmarks, from the installation of the nation's largest multi-family residential green roof in 2004 to the development of the world's highest-rated LEED-ND (Leadership in Energy and Environmental Design-Neighborhood Development) Stage 3 neighborhood in 2012.

At its 2015 Transformation Awards, the Wisconsin Chapter of the U.S. Green Building Council (USGBC-WI) presented HACM with the Community Champion Award of Excellence. The award recognizes HACM's commitment to ensuring that the benefits of sustainable design are shared equitably across society, as well as for setting new benchmarks for sustainable development in Milwaukee and internationally.

Mayor Tom Barrett lauded the honor: "This award recognizes the Housing Authority's leadership in sustainable design practices and its success in demonstrating that conservation and sustainability can be a part of the built environment that benefits all citizens, regardless of their economic circumstances. HACM Secretary-Executive Director Tony Pérez and his staff have earned this honor through their daily commitment to improving the lives of Milwaukee's residents and neighborhoods."

"We are honored to receive this award because it recognizes both the care we take to provide healthy built environments for our residents and our efforts to conserve our planet's natural resources," said Pérez.

Highlights of HACM's sustainability and conservation work include:

- A complete rehab of Lapham Park senior high-rise included an internal redesign to achieve the highest standards for accessibility; the addition of a green roof and other storm water management mechanisms; upgraded elevators to improve speed and efficiency; and energy-efficient windows that significantly reduce energy waste.

- Convent Hill senior high-rise features over 12,000 square feet of green roofs and was built with sustainable design practices. The building it replaced was deconstructed to allow for over 96% of the building to be reused or recycled.

- Between 2009 and 2012, HACM and the State of Wisconsin conducted extensive weatherization activities at seven HACM high-rise buildings. The work significantly extended the life and energy efficiency of 1,090 apartments and produces energy savings each year.

- Highland Gardens and Highland Homes, developed in 2004, included the largest residential green roof of its kind in the U.S. at the time. The neighborhood was named one of America's Best New Development Projects by the Sierra Club.

As a civic institution serving some of Wisconsin's lowest-income residents, HACM works with a variety of private and public entities to incorporate sustainable design into its buildings and neighborhoods. HACM will continue to strive to be a leader in transforming the built environment of Milwaukee and establishing a broader level of awareness of the importance of sustainability and conservation.